This year's Expo is summarized as follows: high level of specifications, high quality of exhibitions, high degree of internationalization, and fruitful exchanges and cooperation. First, the specification level is high

The main leaders of the Guangdong Provincial Party Committee and the provincial government attended the opening ceremony. The current or former national leaders of five countries including Tonga, Ethiopia, South Korea, Nepal, and Thailand, eight foreign provincial and ministerial officials, leaders of several national ministries, and domestic and foreign academicians. Well-known experts and scholars attended the opening ceremony, the tour hall, the theme forum, and the sub-forums. The specifications of the exhibition and theme forums were the highest in history. Second, the exhibition quality is high

First, overseas exhibitors are better. The participation of many well-known overseas brands has effectively promoted the quality of the Expo.

There are also many exhibits at this fair, such as the linseed oil and maple juice in Canada, and the latex pillow in the pure natural latex center in Thailand Second, the technology content is higher. The Guangzhou, Hong Kong, Macao and Dawan District Urban Exhibition Area, which was first set up in this expo, fully demonstrated the technological innovation strength of Guangdong, Hong Kong and Macau's Dawan District to exhibitors and buyers from all over the world Third, the content of the event is rich and colorful. In just one and a half days, the theme forum held at the Baiyun International Convention Center organized a conference and six sub-forums on the theme of “high-level cooperation and high-quality development”, involving technological innovation, business environment construction, and green production. Integration, financing, humanities and other fields. At the site of the Canton Fair, there were 5 supporting activities including 5 exchange promotion activities, 23 cultural exchange activities, and 17 professional summit forums.

Among them, the pavilions from all countries and regions used the stage activities area of the national exhibition area along the “Belt and Road” to carry out nearly 20 project promotion, economic and trade negotiations, brand display and cultural performances. The rich and varied activities arranged to enhance the regional cooperation and international exchange functions of the Expo and improve the effectiveness of the exhibition. Fourth, the layout of the exhibition area is full of features. In order to achieve better display results, exhibitors attach great importance to on-site layout. The national characteristics and exhibition areas of the national exhibition area along the “Belt and Road” are obvious. The special installation rate is close to 50%, of which 62 countries and regions have set national and regional images. Display area The city exhibition areas of Dawan District of Guangdong, Hong Kong and Macao all use special display. Many exhibition areas enhance the visual effects and experience by using modern display means such as LED screen, mobile sliding screen and holographic projection. Third, the degree of internationalization is high Fourth, the exchange of cooperation and fruitful results Second, the role of international exchanges is outstanding. The theme forum embodies the broad consensus of the international community on the construction of the “Belt and Road”. The guests generally expressed their affirmation and expectation for the “Belt and Road” initiative. The 2020 World Expo in China participated in the China Roadshow (Guangdong Station), which bridged the all-round communication bridge between China and the United Arab Emirates and the two sister cities of Guangzhou and Dubai, enhancing exchanges between the two sides in the areas of economy, trade and modern service. work together. Sub-forum China-South Africa Humanities Exchange Think Tank Forum further consolidates the social and public opinion base of economic and trade cooperation and political mutual trust between China and South Africa. This forum also promoted the cooperation between Fiji Port and Guangzhou Port, as well as the substantial cooperation between the transportation and aviation departments of Southeast Asian countries and the domestic aviation industry. The first academician forum of this year, seven academicians from China, Russia and Canada, jointly promoted the scientific and technological docking of the Guangdong-Hong Kong-Macau Dawan District and the “Belt and Road”. Guangzhou Entrepreneur Association and the Municipal Bureau of Commerce jointly hosted the “Entrepreneurship China·2019 Guangzhou Overseas Chinese-Enterprises-ASEAN Enterprise Economic and Trade Exchange Conference” to promote Guangzhou and ASEAN to further deepen all-round cooperation The third is to enhance the willingness of overseas companies to cooperate with Guangdong. Through participation in exhibitions, theme forums and city inspections organized by the organizing committee, many overseas business associations and enterprises have further enhanced their understanding of Guangdong, enhanced their desire to participate in the Haisi Expo, and firmly established “business, talks”. Cooperation, to Guangdong's cognition. The person in charge of the China India Exchange Center said that the Guangdong, Hong Kong and Macao Dawan District has developed economy, the best business environment quality and strong consumption power, and Indian companies should accelerate their entry into the Chinese market. Peleg, Consul General of the Consulate General of Israel in Guangzhou, said that the Haisi Expo is an internationally influential exhibition platform. Next year, Israel will organize more quality enterprises to come to the exhibition. President of the Hong Kong Nepal Chamber of Commerce, Mr. Prakash Pan, said that he will continue to participate in the exhibition next year and organize enterprises to come to Guangzhou to conduct economic and trade matchmaking activities 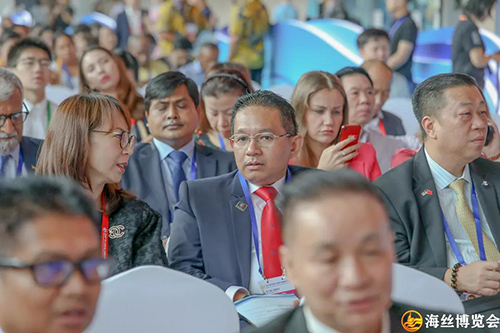 The fourth is to promote cultural exchanges. In this expo, in addition to the national characteristics of 62 countries and regions, Thailand, Georgia, Brazil, Ghana and other pavilions organized a number of special cultural performances every day, so that they gathered a lot of popularity and helped their domestic enterprises. While gaining more trading opportunities, it also allows the audience to better appreciate the exotic culture. More than 1,000 teachers and students from Guangzhou primary and secondary schools visited the exhibition site to learn about the many high-tech products in the exhibition area of Guangdong, Hong Kong and Macao, and to understand the customs, special products, cultural history and other knowledge of the countries along the Belt and Road. National cultural performances, expanding scientific and technological thinking, and fostering international vision have played a very good educational role.